Last year over half of those learners attended programs offered on campus, whereas others went to Indigenous partner campuses or learned and earned credentials in their home communities. Many more chose a part-time learning path.

The First Peoples’ Centre offers comprehensive cultural and academic support for Indigenous learners attending Canadore and reaches out to many more through recruitment, promotion, and community outreach projects.

At Canadore many Nations are represented, including Ojibway, OjiCree, Cree, Algonquin, Metis, Mohawk and Inuit. We welcome approximately 1,000 Indigenous students annually from across the country.

Developed in partnership with Actua, KM empowers young people to see their future educational and career success in high-skill STEAM fields—while giving them renewed confidence in their Indigenous identity and unique place in the world. 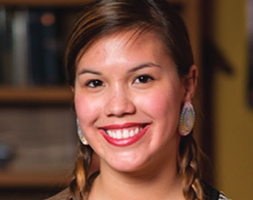 Sasha Ekomiak was raised in Elliot Lake with roots in both Chasasibi and Gaspé, Québec. Sasha is a proud graduate of Canadore’s Indigenous Preparatory Studies Program and pursued further studies with Nipissing University.

“Canadore College is such an amazing place to be and to learn. There is so much nature around, there are so many opportunities to learn and so much support.”