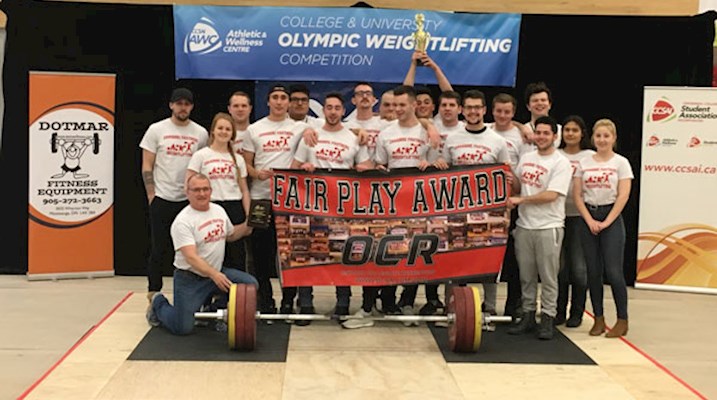 On Saturday, Centennial College in Scarborough hosted the inaugural Ontario College and University Extramural Weightlifting Championship.  The event attracted 60 lifters from 11 schools.  The largest single contingent was the 16 member Canadore Panthers team.  At the end of the day the Canadore squad had a total of 7 medals– 3 gold, 3 silver, and a bronze - and a few other special awards.

In the lighter male weight classes, 62 to 85 kilos, the roster was most competitive. Adam Burke lifted first for the Panthers and finished 8th in the 69 kilo class. In the 77 kilo division Canadore’s Cade Nolan took 4th place with lifts of 79 kilos in the snatch and 100 in the clean and jerk. Close behind in 5th was Patrick Bryce with a 170 total. Connor Bennet was 7th in the same weight group.

At 85 kilos Canadore had four athletes entered. Kaelan Mathon had the highest placing; he succeeded with 93 kilos in the snatch and 107 in the clean and jerk for a 200 total and fifth place.  Duncan Weiszhaar made 170 for 8th place; Roy Kenney made 149 and Roland Korom 148 for 10th and 11th respectively.

All of the medals for the Canadore males came in the heavier divisions - 94 to +105 kilos. In the 94 kilo grouping the top performer of the day emerged. Aiden Woods, a second year Canadore Strength and Sport Conditioning student, put in a most impressive series of lifts to finish with a 290 kilo total. In the snatch he made 117, 125, and finished with 130 kilos. In the clean and jerk, Woods started with 140, to secure the gold medal; he next made 151, and then went on to a strong success at 160. Aiden’s final lifts were personal bests, new Canadore records, and they also qualified him for the Canadian Senior Championship slated for Toronto in May.  The silver at 94 kilos went to Justin Kovacs of York University; Caleb Mady of Nipissing took the bronze.

The last two weight divisions were dominated by Canadore lifters. At 105 kilos Liam Macdonald totalled 226 kilos to finish ahead of Chris Stokes of McMaster at 215, and Mark Luo of Waterloo at 205. In the last male category, +105 kilos, Canadore lifters Phil Dampier and Forrest Sutherland won gold and silver. Dampier snatched 101 and clean and jerked 117; Sutherland did 83 in the snatch and 101 in the clean and jerk.

The battle for the top team plaque was fought between McMaster and Canadore.  Based on the scoring of the top three males and the top three females, the final tally had McMaster on top with 159 points to Canadore’s 157. Waterloo was a distant third with 106. As a consolation, the Canadore College team was presented with the Ontario College Recreation - Fair Play banner. The award was voted on by select officials from the Ontario Weightlifting Association and head coaches from the competing schools. 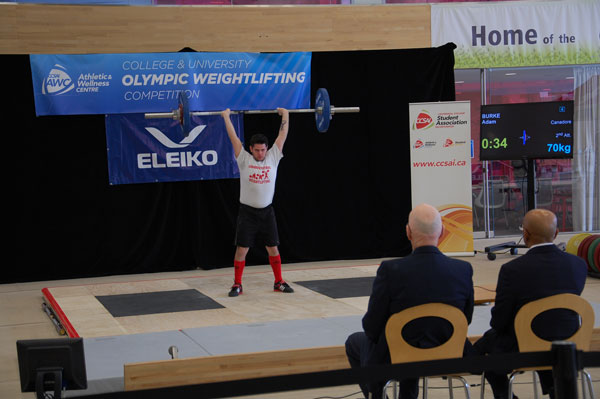