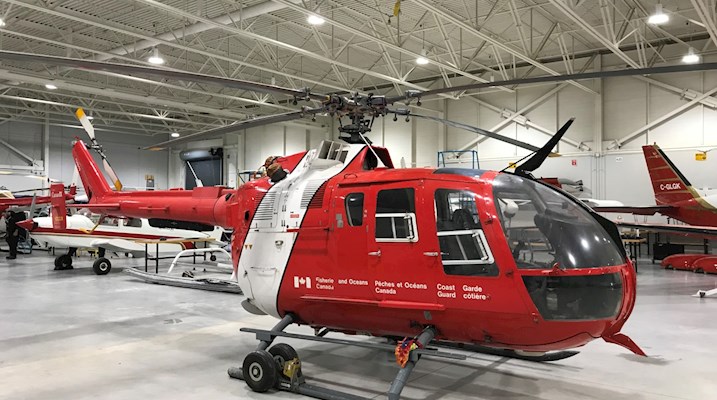 (NORTH BAY, ONT.) -- Canadore College was one of 10 Transport-Canada approved training institutes to receive a surplus BO105 helicopter from the Canadian Coast Guard.

The helicopter, which was appraised at nearly $650,000, was added to the large fleet of aircraft at the college’s dedicated aviation and aerospace campus. It will be used as an experiential training, allowing learners in aviation-related programming to master hands-on skills and knowledge.

Canadore College plans to keep the BO105’s original and graphics to and respect the Canadian Coast Guard and Government of Canada.

A number of other postsecondary institutions across Canada also received similar donations as the result of the Coast Guard renewing their in-service fleet.

Canadore College trains people through applied learning, leadership innovation. It provides access to over 75 full-time quality programs and has outstanding faculty and provides success services to students from nearly 400 Canadian communities and 15 international countries. Nearly 20 percent of Canadore’s total student population is of Ojibway, Oji-Cree, Cree Algonquin, Mohawk, Inuit or Métis descent from Ontario, Québec and nation-wide, one of the highest representations in the provincial college system. The College and its students add nearly $244 million to Nipissing Parry Sound Service Area economy. Approximately 1,000 students graduate from Canadore each year, and they join 45,000 alumni working across the globe. Canadore receives less than 50 of its traditional funding from the provincial Ministry of Training, Colleges Universities and relies on its own innovation and entrepreneurial endeavors and generous donors for the balance.