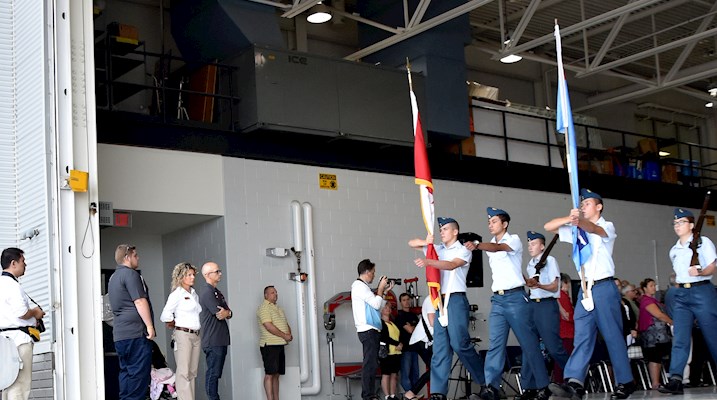 (NORTH BAY, ONT.) – One hundred and twenty Royal Canadian Air Cadets from across Canada graduated from Canadore this morning.

The Cadets received a certificate of achievement from the Canadian Forces after completing 142 hours of instruction in the Advanced Aviation Technology - Aircraft Maintenance and Airport Operations programs at Canadore.

Comprehensive training included courses in airport safety, air traffic control, ground services, and meteorology to name a few, and was delivered six days a week for eight hours each day.

The Cadets, aged 12 to 18, began their training in early July. Hundreds of applications are received from squadrons across Canada each year for this prestigious training. Applicants compete for the coveted spots based on academic merit, essays, community service and interviews.

Two deserving Cadets were awarded the Army Navy and Air Force Veterans in Canada Cadet Medal of Merit (ANAVETS). Cadet Sonia Wong from Edmonton, Alberta and Cadet Liam Funnell from Edmonton, Alberta were chosen for demonstrating overall achievement in their courses, strong leadership qualities, above average dress, a high level of motivation and consistent cooperation with others.

The Cadet Programme is open to all youth ages 12-18 years old. As they progress, their training becomes more specialized and the cadets have many subjects they can choose to focus on. The aim of the program is to develop in youth the attributes of good citizenship and leadership, promote physical fitness and stimulate an interest in the sea, land and air activities of the Canadian Forces.